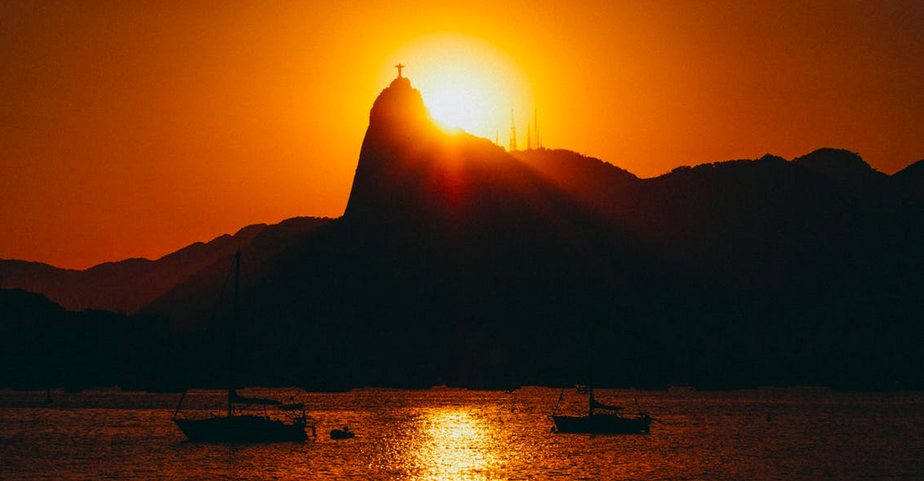 A great day for Brazil (and the world) on Wednesday the 29th November 2017 ~ the Brazilian Supreme Federal Court (STF) banned the production, commercialism and use of asbestos in Brazil, by a vote of 7 over 2.¹ 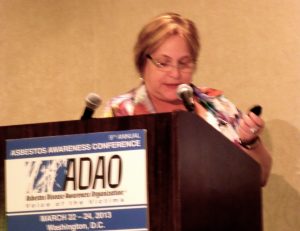 A huge congratulations is due to Fernanda Giannasi (pictured at the 2013 ADAO Conference), a leading Brazilian advocate with the Brazilian anti-asbestos advocacy organisation, Associação Brasileira dos Expostos ao Amianto (ABREA), since it was founded in 1995.  Congratulations must also go to the Brazilian trade unions, legal teams and activists around the world who have supported the cause. 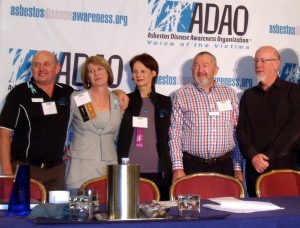 We were fortunate to meet Fernanda in March 2013 when part of The Bernie Banton Foundation delegation (pictured right: myself, Karen Banton, Louise Williams (dec), John Carter and Geoff Fary) to the ADAO Asbestos Awareness Conference in Washington DC USA.

Brazil banning asbestos is particularly significant as they are (were) currently one of the largest miners and exporters of asbestos fibres in the world.  Importantly they were the main supplier of raw asbestos fibres to the USA – yes, shamefully, the USA still does not have a total ban on asbestos!

Russia, China and Kazakhstan are now the major players in the mining of asbestos – one fears it will be a long hard road before we see these countries stop mining and supplying asbestos fibre, and manufactured asbestos containing products.

Many people don’t realise how few countries around the world have actually fully banned asbestos. As of 23 October 2017, acclaimed UK activist, Laurie Kazan-Allen from the International Ban Asbestos Secretariat, had only 61 countries listed as having banned asbestos.²

Whilst sixty one (61) countries may have banned asbestos in legislation, it doesn’t mean they actually have adhered to, or enforced the ban. New Zealand banned asbestos in 2016, however, the ban comes with exemptions according to availability of alternatives and also pricing factors.  Eight European Union countries on the list have not been able to be verified as being compliant with the ban, along with a question mark on the Seychelles.  So realistically, it is safe to say only 51 countries as of the 23 October 2017, could be said to have known full bans in place.²   Adding Brazil to the list will mean 62 countries with a ban in place…. one hopes in a years time they will be listed as one of those countries able to be confirmed as being compliant with the ban and bring the true ban figure up to 52.

The next country to implement a full ban hopefully will be ex major asbestos miner and exporter, Canada who announced in December 2016 they would ban all asbestos use and importation by 2018.³

It is a long haul out of the asbestos abyss as USA activist and co-founder of the Asbestos Disease Awareness Organisation, Linda Reinstein; Canada’s Kathleen Ruff from RightOnCanada, the UK’s Laurie Kazan-Allen from the International Ban Asbestos Secretariat and of course, Fernanda Giannasi have found.  These four powerhouse anti-asbestos advocates have been the backbone in the fight against asbestos, not only in their own countries, but internationally where they have made an indelible difference to the anti-asbestos landscape.

Banning asbestos is only the start, as countries like Australia have found.  After nearly 14 full years since Australia banned asbestos, we are still battling illegal asbestos containing imports; little, if any consistent legislation across all levels of government and jurisdictions; few, if any laws, legislation and enforcement bodies covering domestic applications; lack of disposal facilities; insufficient funding for constant awareness campaigns; and importantly, it would seem no hint of any legislative body with the backbone to upgrade legislation and enforce meaningful penalties for those who flagrantly break what laws that are in place!

Given, after 14 years Australia has a long way to go, where does that leave the 140 odd countries that do not have total bans in place?

¹Brazilian Supreme Court Bans Use of Asbestos in Brazil
http://www1.folha.uol.com.br/internacional/en/business/2017/11/1939473-brazilian-supreme-court-bans-use-of-asbestos-in-brazil.shtml